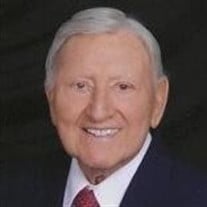 William M “Bud” Hagenbuch, 94, The Villages, Florida passed away on March 10, 2019 at The Villages Hospital. Bud was born on February 7, 1925 in Shickshinny, Pennsylvania to his parents Robert Hagenbuch and Mattie (Pennypacker) Hagenbuch. He was a retired Construction Project Manager in the Commercial Construction Industry. He was a proud Veteran of World War II serving in the United States Army Air Corps as a Waist Gunner on both the B-17 and the B-24 Bombers over Europe. He and his wife moved to The Villages 17 years ago from Deltona, Florida. He was of the Lutheran Faith and a member of Trinity Lutheran Church, Summerfield, Florida. He loved to be surrounded by his family. He is survived by his loving wife of 40 years: Donna Hagenbuch of The Villages, FL; three sons: Don Hagenbuch and his wife Wanda of Rochester, NY, Lance Hagenbuch and his wife Mai of Los Angeles, CA and Larry Hagenbuch and his wife Claire of Dallas, TX; two daughters: Diane Pye and her husband Charles of Colorado City, CO and Valerie Wagner and her husband Terry of Deltona, FL; nine grandchildren: Joe Pye, Jamie Pye, Lynsie Steele, Kelly Hagenbuch, Keeley Hagenbuch, Sarah Hagenbuch, Ryan Wagner, Lucy Hagenbuch and Henry Hagenbuch and seven great-grandchildren. In lieu of flowers the family has requested donations to be made to The Florida Sheriffs Youth Ranch at P.O. Box 2000 Boys Ranch, Florida 32064

William M &#8220;Bud&#8221; Hagenbuch, 94, The Villages, Florida passed away on March 10, 2019 at The Villages Hospital. Bud was born on February 7, 1925 in Shickshinny, Pennsylvania to his parents Robert Hagenbuch and Mattie (Pennypacker) Hagenbuch.... View Obituary & Service Information

The family of William M Hagenbuch created this Life Tributes page to make it easy to share your memories.

Send flowers to the Hagenbuch family.