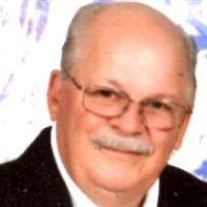 Robert M. Felitsky, Sr. passed away peacefully on April 17, 2015 at The Villages Hospital. He had a lot of “Bumps in the Road” as he would say. His strength in the Lord got him through it and his soul mate and best friend, Cindy, saw him through his journey. Rob was born May 6, 1946 in Akron, Ohio. He graduated from Springfield High School and Akron University. In 1965 he married his High School sweetheart, Cindy Rankin, and they would have celebrated their 50th anniversary this year. Rob worked for Goodyear Tire and Rubber for 42 years, traveling all over the world. He was a volunteer fireman and paramedic in Uniontown. He was also in the Lions club in North Canton. He left a lot of wonderful friends in Ohio when he moved to The Villages 5 years ago to retire. Rob enjoyed his life and did it all. He had received a Patent Award from Goodyear Tire and Rubber in the 70’s, he loved retirement and was a very good golfer, he had 3 hole in one’s and played every course in The Villages. He loved his La Trobe family and everyone loved him. Survivors include his beloved wife of 49 years, Cindy; daughter, Robin Russell (Ken); son, Robbie, Jr.; grandchildren, Lindsay, Bodie, Meagan and Preston; brother, Jim Felitsky; mother-in-law, Bessie Rankin along with many other family members and friends. Rob was preceded in death by his parents, Frank and Carolyn Felitsky; father-in-law, Clarence Rankin and brother, Steve. A funeral mass will be celebrated 1200pm, Saturday, May 2, 2015 in St. Vincent dePaul Catholic Church, Wildwood with inurnment in Hillcrest Memorial Gardens, Leesburg. For those wishing, memorial contributions may be made to the American Cancer Society or the American Heart Association in Rob’s memory. Rob will be truly missed by all. Thank you so much La Trobe family and Cousin Tom and Marge Dukeman for all of your love and support. “Life was Good”. On-line condolences may be shared by visiting www.bankspagetheus.com. Arrangements are entrusted to Banks/Page-Theus Funerals and Cremations, Wildwood.

Robert M. Felitsky, Sr. passed away peacefully on April 17, 2015 at The Villages Hospital. He had a lot of &#8220;Bumps in the Road&#8221; as he would say. His strength in the Lord got him through it and his soul mate and best friend, Cindy,... View Obituary & Service Information

The family of Robert M. Felitsky Sr. created this Life Tributes page to make it easy to share your memories.

Send flowers to the Felitsky family.