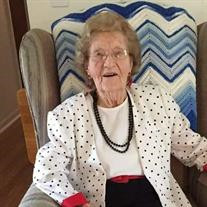 Mildred Wolfe, age Ninety-Nine, was called to her heavenly home by her Lord and Savior, Jesus Christ, on August 8th,2017. Mildred was born on April 6, 1918 in Hooker, Oklahoma. She was the youngest of 9 children, all of whom have pre-deceased her: Hansford Garrett of Delta, CO; Alberta Heaton of Liberal, KS; Hazel Buchanan of Liberal, KS; Virgil Garrett of Ruidoso, NM; Mabel Keater of Hialeah, FL; Olive Stapleton of Wichita, KS; Ruby Lassiter of Fort Wayne, IN; and Horace Garrett of Miami, FL. Mildred lived there on her father’s farm until she was 11 years old at which time they moved to a farm near Campo, Colorado. Her father was an elder in the First Christian Church of Hooker, and Mildred and her brother were faithfully taken to church by horse and wagon. She became a baptized believer at age 8. Mildred lived through the Dust Bowl period and the Great Depression early in her life, she was always grateful for what the Lord helped her achieve. Since the school of Campo, CO, was not an accredited school, her parents thought it best to allow Mildred to move with her sister in Liberal, Kansas, where she graduated as valedictorian of her class of 72 students. She then completed a business art course at Wichita Business College. Following college Mildred moved to Springfield, CO, where she was employed by the Soil Conservation Service as a draftsperson and business planner. After working for 3 years, she married her school days sweetheart, Edwin Moore. They moved to Miami, FL, where he went into the construction business until he enlisted with the Sea Bees and the U.S. Navy. He was sent to the Pacific Theater and later was stationed in Providence, RI. Mildred joined him in Providence and her first son, Edwin, was born there. They returned to Miami when Edwin was discharged, however his health was failing and he passed in 1956. Mildred married a former childhood friend from Springfield, CO, Kenneth Wolfe, and they made their home in Miami, FL, where their son Lee was born. Mildred resumed her profession as a business designer and Kenneth managed, developed and invested in real estate. She was successful in designing the interiors for the first high-rise condominiums in Miami, “Biscayne 21”, and was awarded membership in the National Society of Interior Designers (NSID). She was retained as interior designer for Southern Bell Telephone Company for South Florida, the Miami Herald, Miami Daily News, First National Bank of Miami, as well as many branch banks and churches, in particular, First Presbyterian Church of Fort Lauderdale and their well-known Pastor, James Kennedy’s home. Mildred was active in the Allapattah Baptist Church in Miami, FL, serving with her husband Kenneth as teacher and director of bible study for 25 years. Mildred and her late husband, Kenneth, moved to Leesburg in 1972 and invested in property where they developed, owned and operated Lady Lake Mobile Home Park, and a horse boarding facility for 40 years. Her two sons, Ed and Lee later joined in operating the park. Soon after coming to Leesburg, Mildred and Kenneth joined and became active in the First Baptist Church of Leesburg, where they started a Married Young People’s Department and Homebound Ministry. Mildred continued serving in various capacities including the First Baptist Thrift Store and the Benevolent Center of Leesburg. She started the Christian Women’s Club of Leesburg, which she has been responsible for expansion to the surrounding communities and serving any way she could. Mildred continued to serve as a greeter at the first Baptist thrift store until her passing. Mildred leaves two sons, Edwin Moore and wife Linda of Brooksville, FL and Lee Wolfe and wife Tammy, of Lady Lake, FL, three grandsons, Brian Lee Moore and wife Linda of Mims, FL, Kevin Wolfe and wife Dominika of Orlando, FL, and David Wolfe of Sarasota, FL. She also leaves two great-grandsons, Garrett Daniel Moore and Hunter Kenneth Moore, both of Mims, FL. Funeral Services will be held Friday August 11th at 11:oo am at Leesburg First Baptist Church. Family asks that donations be made to either Cornerstone Hospice or Leesburg First Baptist Church. Page Theus Funeral Home, Leesburg in charge of arrangements

Mildred Wolfe, age Ninety-Nine, was called to her heavenly home by her Lord and Savior, Jesus Christ, on August 8th,2017. Mildred was born on April 6, 1918 in Hooker, Oklahoma. She was the youngest of 9 children, all of whom have pre-deceased... View Obituary & Service Information

The family of Mildred Wolfe created this Life Tributes page to make it easy to share your memories.

Mildred Wolfe, age Ninety-Nine, was called to her heavenly home...

Send flowers to the Wolfe family.