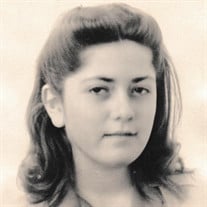 Helen E. Wharton Duszczak Specht of Groveland, Florida, age 91, passed from this life on January 7, 2022 surrounded by her loving family in Toms River, NJ. Helen was born on February 19, 1930 to Charles Franklin and Louisa Bauer Wharton of Irvington, NJ. Her early life centered around sports and music. She was an accomplished ice skater and mastered the accordian which she played up until a few years ago. Helen was a graduate of Irvington High School and began her career working at Public Service Electric and Gas Co. right after graduation. Mother of two children, Anita and Wayne, she was widowed upon the death of her first husband, Anthony Duszczak. Several years later, she married Raymond Specht and welcomed baby, Tara Helen to the family. Helen was known for her quiet, friendly manner. Helen was an accomplished seamstress making costumes, clothing and designing unique patterns. She created beautiful needlework, blankets and cloaks. She was successful in developing court stenography skills, however, could not perform in court due to hearing loss. Not to be deterred, she went back to office work at Public Service and became an R & D Assistant. Helen was loved and respected by her peers. After retiring, she moved to Holiday City in Toms River, NJ, was a avid reader of mystery and detective stories and loved predicting the “who dunnit” before finishing the first chapter. Helen loved Florida and made it her permanent home in 1992. Moving to Groveland in 2000, she became a member of Edge United Memorial Church and was a volunteer working at the Clothing Closet for many years. Generous and caring, she was a good mother, neighbor and friend to many. She is greatly missed by all who knew her. She is preceded in death by her beloved sister, Doris Horn and son, Wayne Duszczak. Helen leaves behind her family, Anita and Mark Alliston, Tara and Steven Furman, granddaughters Jessica Alliston Redmond and Michelle Schreihofer, grandson Anthony Duszczak, great-grandsons, Charles Franklin and Theodore Joseph Redmond and nephews Glenn Horn and Scott Horn-Jones. Services for Helen were private at Hillcrest Memorial Gardens Cemetery in Leesburg, Florida.

The family of Helen E. Wharton Duszczak Specht created this Life Tributes page to make it easy to share your memories.