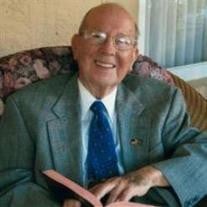 Homer resident the Reverend Arthur Irwin Harris, 91, died on Wednesday, Dec. 23, 2015, at South Peninsula Hospital in Homer. A celebration of his life will be held in Florida at a later date. Rev. Harris was born Jan. 1, 1924, in Falls Church, Va. He was the middle child of five sons born to Charles and Margaret Harris. When Arthur was a few months old, the Harris family relocated to Capitol Heights, Md. They built a new home, and this is where Arthur and his brothers were raised. Arthur graduated from Maryland Park High School in 1943, and later married Rosemarie Wheeler. Arthur and Rosemarie had attended and been active in the same church all their lives, where he played the piano and they both sang. From an early age Arthur felt the call of God on his life, and planned even as a very young man to go into the ministry. During their early years of marriage, Arthur worked at the U.S. Navy Yard in Washington, D.C. Soon, however, the family moved to Illinois where he attended Moody Bible College. In his college yearbook, Arthur was noted as being “small but mighty.” His devotion to God, love of people, sense of humor, sparkly personality and natural musical gifts all suited him perfectly for his work in the ministry. After leaving Moody Bible College, Arthur completed his college education at the Washington Bible Institute in Washington, D.C. By this time he and Rosemarie had two children, Sharyn Lee and Stephen Howell. They were offered and accepted a pastorate in Oxon Hill, Md., where they served for a number of years. After leaving Oxon Hill, the family moved back to Capitol Heights, which was closer to family. Arthur took a position with John L. Lewis, United Mine Workers District 50, and continued to work for that company until they merged with US Steel. In 1969, Arthur married Marie Farr, and US Steel relocated them to Pennsylvania. When he retired from US Steel in 1975, Arthur and Marie moved to Lady Lake, Fla., fully planning to spend their total retirement years enjoying the warm Florida weather. However, God had other plans, and this move simply began the next chapter in Arthur’s life. Instead of retiring, Reverend Harris became one of the founding pastors of the Chapel of Christian Faiths, the first church in “The Villages.” He remained the senior pastor there for the next 22 years. He saw the congregation grow, and eventually two Sunday morning services were needed. He also saw the church through four building expansion programs. These were some of the happiest years of his life. He truly loved the Chapel and his “Chapel family.” In 2003, Arthur was forced to leave the pulpit for health reasons, and in 2009, he moved to Homer to live with his daughter, Sharyn, her husband, Joe and his beloved granddaughter, Jennamarie. Arthur was preceded in death by his wife, Marie Farr Harris; parents, Charles and Margaret Harris; and brothers, Charles Harris, Edward Harris, Teddy Harris and the Rev. Wesley Harris. He is survived by his daughter, Sharyn Super, and her husband, Joe; son, Stephen H. Harris; and granddaughter, Jennamarie Super.

Homer resident the Reverend Arthur Irwin Harris, 91, died on Wednesday, Dec. 23, 2015, at South Peninsula Hospital in Homer. A celebration of his life will be held in Florida at a later date. Rev. Harris was born Jan. 1, 1924, in Falls Church,... View Obituary & Service Information

The family of Rev. Arthur I. Harris created this Life Tributes page to make it easy to share your memories.

Send flowers to the Harris family.