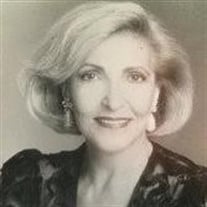 Nancy S. Heyman, aged 87 passed away on Friday, May 3, 2019 in The Villages, Florida surrounded by her loving family. Nancy was born on April 3, 1932 in Reading, Pennsylvania to Bernard Rosenthal and Mildred J. (Cohen) Rosenthal. Music and Nancy are synonymous. She has sung all her life, having been on the stage since childhood. As a teen, she performed in school shows and, even then, sang with a dance band. Nancy attended Syracuse University, where she and Norman met as freshmen and in 1954, married. While at Syracuse, Nancy had her own radio show, “Soft Lights and Sweet Music”. Summers were spent entertaining at a resort in Jackson, N.H. singing with the Irving Field Trio. As Nancy has said many times, Marriage came with its own joys and challenges; balancing priorities set in support of her family with her love for entertaining led her to coin the phrase “From the Kitchen to the Stage!” While living in Horseheads, N.Y., she appeared in Little Theatre productions, wrote copy for local radio and television stations, and provided musical programs for many local organizations. After moving to Florida in 1976, with children grown, she had the opportunity once again to create and perform in a cabaret act, created for Nancy by alumni of the great Fred Waring Orchestra; arranger Hal Kanner, and soloist Joanne Wheatley. Since Nancy and Norman’s arrival to The Villages in 2002; she was a vocalist with The Villages Swing Band for 12 years, as well as singing with the Temple Shalom choir as a featured soloist. Nancy also made weekly rounds to the various assisted living centers throughout the area, giving performances that brought a glint in the residents’ eyes and a tap of their feet as they undoubtedly recounted sweet memories of their youth. She is survived by her loving husband of 64 years: Norman E. Heyman of The Villages, FL; a daughter: Alexandra Rae of The Villages, FL; two sons: Dr. Stephen J. Heyman and his wife Colleen of Nashville, TN and Philip Heyman and his Fiance, Miryam Salazar of Coral Springs, FL; two brothers: Gerald Rosenthal of Bradford, VT and H. Leonard Rosenthal of Ridge Manor, FL; three grandchildren: Caitlin Heyman Tisch, Anna Rose Heyman and Samuel Heyman and one niece and two nephews. The family has requested donations be made to Temple Shalom Choir Fund at 13563 County Road 101 Oxford, FL 34484 to help build the new choir loft in Nancy’s loving memory.

Nancy S. Heyman, aged 87 passed away on Friday, May 3, 2019 in The Villages, Florida surrounded by her loving family. Nancy was born on April 3, 1932 in Reading, Pennsylvania to Bernard Rosenthal and Mildred J. (Cohen) Rosenthal. Music and... View Obituary & Service Information

The family of Nancy S Heyman created this Life Tributes page to make it easy to share your memories.

Send flowers to the Heyman family.