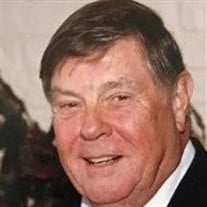 Earl John Thomas, Jr. passed away peacefully in The Villages, Florida on August 22, 2018 after four years of illness. He was surrounded by family members and clergy. Earl was 88 years of age. Earl was born on January 27, 1930 in Youngstown, OH. He attended Saint Patrick’s Elementary School and graduated from Ursuline High School, Class of 1948. After high school, Earl entered the seminary at Saint Mary’s College in Saint Mary, KY and later attended Mount Saint Mary’s College in Norwood, OH. In June of 1955, he obtained a Bachelor of Social Sciences Degree from John Carroll University. After graduation, Earl became a sales professional and worked for Westinghouse in Cleveland, OH. He learned the electrical business by attending a training institute at Carnegie Mellon University in Pittsburgh, PA. In 1958, Earl married Sally (née Healey) and they moved to Madison-on-the-Lake, OH where he almost single-handedly built a three bedroom home on Lake Erie. In the fall of 1958, Earl began selling corrugated shipping containers for the Rochester, NY plant of Fort Wayne Corrugated which was later acquired by the St. Joe Paper Company. Earl and Sally relocated to Buffalo, NY where they joined Christ the King Parish. Earl was a member of the choir, the Knights of Columbus, and President of the Holy Name Society. In 1970, Earl was named Sales Manager for the Rochester division of the St. Joe Paper Company and the family settled in Pittsford NY, a suburb of Rochester. Earl was very active in his children’s activities. He was President of the Pittsford Vince Lombardi Football League while his sons played football and a daughter was a cheerleader. Earl also coached Little League Baseball for a number of years. Earl loved being near the water and was an avid boater and sailor for most of his adult life. He was a proud member of the Rochester Yacht Club where he served on the Board of Directors and as House Chairman in the late 1980’s. After their five children moved from Rochester, Earl and Sally spent time as snowbirds in a condo in Vero Beach, FL. Hurricane Jeanne devasted their property on the Florida East Coast, and, despite Earl’s innate draw towards water, Earl & Sally relocated to The Villages in 2004 as full-time residents. In The Villages, Earl continued to be an organizer who always brought his friends together. A neighborhood shuffleboard league was his first project. This was followed by a weekly afternoon men’s golf group. Although unable to participate once he became ill, Earl continued to follow news of the group. Earl enjoyed playing bridge on a weekly basis with some friends…and relished his daily chess games with his three sons on his iPhone, two of whom he beat on a regular basis. Earl had a strong faith, a wonderful sense of humor, and loved to sing, especially Irish ballads. He was extremely proud of his children, their spouses, and grandchildren. Earl is survived by his loving wife of 60 years, Sally, and their five children: Kathleen (Bill) Sever, John (Eula) Thomas, Michael Thomas (and Dina), David (Amy) Thomas, and Mary Jane (Jeff) Hess and his 13 grandchildren: Zachary (Christen), Joshua (Ashley), Matthew, Caroline, Emma, Sarah, Addison, Mia, Gabi, Bo, Tanner, Carson, Parker and several great-grandchildren. He is also survived by numerous cousins, nieces, and nephews.

Earl John Thomas, Jr. passed away peacefully in The Villages, Florida on August 22, 2018 after four years of illness. He was surrounded by family members and clergy. Earl was 88 years of age. Earl was born on January 27, 1930 in Youngstown,... View Obituary & Service Information

The family of Earl J Thomas created this Life Tributes page to make it easy to share your memories.

Earl John Thomas, Jr. passed away peacefully in The Villages,...

Send flowers to the Thomas family.